I’ve met Frank Cottrell Boyce and he’s a delightful man.  We should have met at the Carnegie Kate Greenaway Medal award ceremony in July 2005.  However, the devastation wreaked on London by terrorists the day before meant that the ceremony was cancelled.  Instead there was a much lower-key award made at the end of the summer in CILIP’s building in Bloomsbury.  I seem to recall that the judges and Frank convened on the pavement outside for photographs.  And as we hung around, we chatted.

The book we were celebrating was, of course, Millions.  I had enjoyed it very much and I continued to read Frank’s books after that, often reviewing them.  Sputnik’s Guide to Life on Earth came to me from Catherine at Macmillan with a post-it list attached.  That seemed a bit random to me and not something Catherine normally did.  However, once I’d read the book, it all made perfect sense. 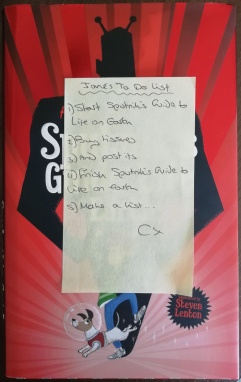 I felt a strange sense of recognition as I read on and gradually I realised that the book was set in and around Dumfries, the town in southern Scotland that we moved to as I was about to start school.  And it seemed to me that it was in fact set in my part of Dumfries as I wrote in my review for The Scotsman.

Sputnik’s Guide to Life on Earth is whimsical, heart-wrenching and hilarious. Prez is a boy whose life has been turned upside down causing him to retreat into silence. But when Sputnik erupts into his life all that changes. For the better? Well, eventually. Frank Cottrell Boyce’s books are always enjoyable and this one, set in and around Dumfries, is no exception. As a very former pupil of Troqueer Primary I was delighted to find myself reading about my old haunts but wherever you’re from you’ll enjoy walking those streets with Prez, Sputnik and their friends.

As I said, I’ve read most of Frank Cottrell Boyce’s books and it’s hard to choose you favourite book by an author you like but I think this might be mine.